The rent laws will be renewed this June in Albany.
They don't just happen in a void.  The landlord lobby
is out in force, and tenants have to be louder.  So urge
our elected officials to support Housing Justice for All.

May 2, 2019: Testify in person or by email to the NYS Assembly's Standing Committee on Housing. 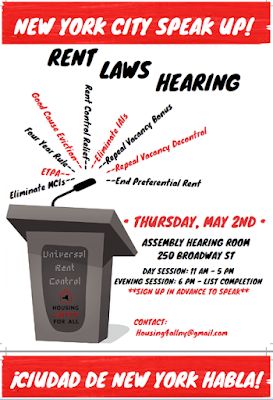 Get on the bus for Albany on May 14th: 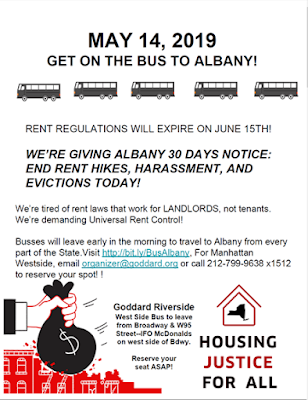 Given a Democratic State Senate and a Democratic Assembly (and Governor), we actually have a chance of getting these passed:
· Protect market-rate (currently un-regulated) · tenants all over NY State - and not just in NYC, Westchester, Rockland, and Nassau Counties.  This includes a guaranteed renewal lease unless the tenant seriously violates the lease.
· Eliminate ways landlords raise the rent beyond · what many tenants can pay, including:
o Ending the MCI surcharge. (Right now it's a permanent increase in the rent.)
o Ending Individual Apartment Improvement (IAI) surcharges that raise rents in both vacant and occupied apartments.
o Making preferential rents permanent.
o Ending vacancy increases that landlords get just because an apartment becomes vacant.
o Reduces increases in rent controlled apartments (those built before 1947).
· End vacancy decontrol (vacancy deregulation)
Tell our legislators and the Governor to pass them!

PLEASE! Write to Gov. Cuomo, Speaker of the Assembly Carl Heastie, and your State Senator and State Assembly Member.

Gov Cuomo has announced he will not support roll backs of MCI increases, and Assembly Speaker Heastie wants to drop protection for market tenants from the list. They need to hear from us.
Posted by Sue Susman at Sunday, April 14, 2019