ProPublica: Why Big Developers Give $$$ to Politicians

Why Developers of Manhattan
Luxury Towers Give Millions to
Upstate Candidates
A first-of-its-kind analysis shows just how tactical the real-
estate industry is about bankrolling state legislators who will
protect its $1.4 billion tax break and weaken rent laws.

The Fateful Vote that Made NYC Rents So High

The Fateful Vote That Made

A 1994 City Council vote enabling landlords
to dodge limits on rent increases has had a
profound impact on the lives of New Yorkers.
by Marcelo Rochabrun and Cezary Podkul
ProPublica, Dec. 15, 2016, 8 a.m.

How landlords gained the ability to remove apartments
from regulation has a surprising backstory. Over the
years, the Republican-dominated State Senate has often
flexed its muscle to weaken rent stabilization at the
behest of real-estate interests. Yet it was an overwhelmingly
Democratic body that made the most important and
far-reaching move. Shortly before Easter in 1994, by
a 28-18 margin, the New York City Council implemented
what is known as “vacancy decontrol,” which allowed a
landlord to escape regulation and charge market rates
once tenants moved out of apartments that cost at least $
2,000 a month. Then-Mayor Rudolph Giuliani signed
the measure into law.

Read the full article!
Posted by Sue Susman at Thursday, December 15, 2016 No comments:

This weekend:  Join the Annual West Side Tenant Conference on Zoom - and listen to a mayoral candidates debate. 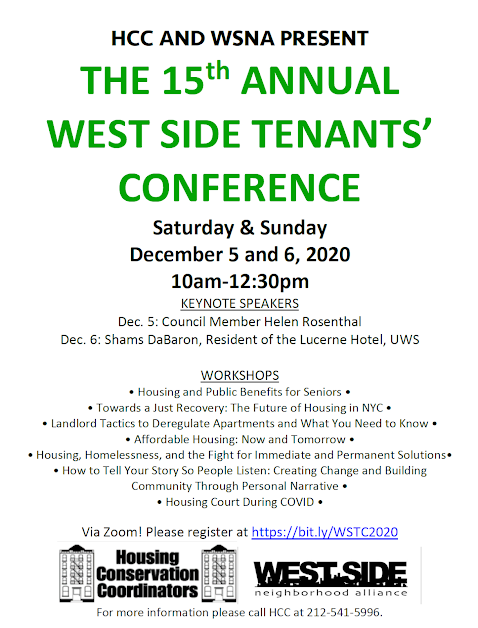