ARTICLES OF INTEREST TO TENANT ADVOCATES

Information for Tenants during the pandemic

The NYC Comptroller's office has created a website with resources for tenants and others.

The state courts are closed except for emergencies (like a vacate order or the landlord or your roommate locking you out of your apartment, or the ceiling caving in).  And landlords are barred from filing eviction proceedings until the pandemic is over.

However, under current law, tenants will still owe the rent for this period.

State Senator Brian Kavanagh has proposed a "rental assistance voucher" program in a bill.  This would pay the money to landlords for poorer tenants whose income is affected by the COVID-19 (coronavirus) pandemic.

Please urge your state legislatures and Governor Cuomo to get it passed.

https://gothamist.com/news/new-york-pause-coronavirus-covid-19-stay-home
Posted by Sue Susman at Sunday, March 22, 2020 No comments:

​ARTICLES OF INTEREST TO TENANT ADVOCATES:

ARTICLES OF INTEREST TO TENANT ADVOCATES:


HOMELESSNESS
Daily News: State Assembly proposes new $450 million program to tackle homelessness across the state
David Brand: The urgent campaign to include rental assistance for homeless New Yorkers in the state budget (City Limits)
Michael Gartland: One in 100 newborns last year went "home" to a shelter, per Coalition for the Homeless (Daily News)

Bill Mahoney: Despite Cuomo's statement that U.S. Census is a priority, state has not yet released outreach funds from last year's budget (Politico NY)
https://www.politico.com/states/new-york/albany/story/2020/03/07/state-slow-to-start-its-census-prep-efforts-1265981

City Limits: Emergency grants can help stop homelessness -- if you have a lawyer
https://citylimits.org/2020/03/11/emergency-grants-can-help-stop-homelessness-if-you-have-a-lawyer/

Erin Hudson: Brokers can charge fees at least until June as state asks for extension to respond to real estate industry's lawsuit (The Real Deal)
https://therealdeal.com/2020/03/06/three-more-months-in-limbo-broker-fee-ban-lawsuit-delayed/

Mother Jones/ProPublica: The benefits of being Joe Biden's brother
https://www.motherjones.com/politics/2020/02/the-benefits-of-being-joe-bidens-brother/

Nathan Robinson: Democrats, you really do not want to nominate Joe Biden (Current Affairs)
(A long but thoroughly documented & reasoned article about why Joe Biden would be a disastrous Democratic nominee, and why Democrats should support Bernie Sanders)
https://www.currentaffairs.org/2020/03/democrats-you-really-do-not-want-to-nominate-joe-biden/

Joseph Spector: Coronavirus scams: How to protect yourself from being ripped off (Journal News)
https://www.lohud.com/story/news/politics/2020/03/05/coronavirus-scams-how-protect-yourself-being-ripped-off/4964505002/

City & State: Everything New Yorkers need to know about the 2020 U.S. Census
https://www.cityandstateny.com/articles/policy/policy/everything-new-yorkers-need-know-about-2020-census.html

Landlords have plenty of other reasons to improve buildings (other than collecting MCI increases).
The Rent Guidelines Board already calculates in the costs of maintaining a rental building when it sets the rent increases (if any) each year. Why should landlords be compensated twice?

MCI increases benefit mainly large landlords. From 2000 to 2014, 70% of MCI applications received by the State's housing agency came from landlords who owned more than 150 units.

It won't hurt the construction industry since MCI jobs are a tiny slice of the pie. In 2014, MCI costs were only 3/10ths of one percent of the total amount spent on construction.  So they won't affect construction jobs.

https://www.housingjusticeforall.org/mcis
Posted by Sue Susman at Tuesday, March 10, 2020 No comments:

Support the Good Cause Eviction bill! 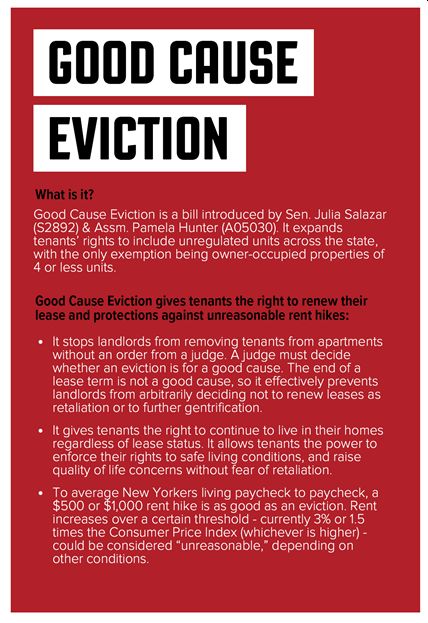 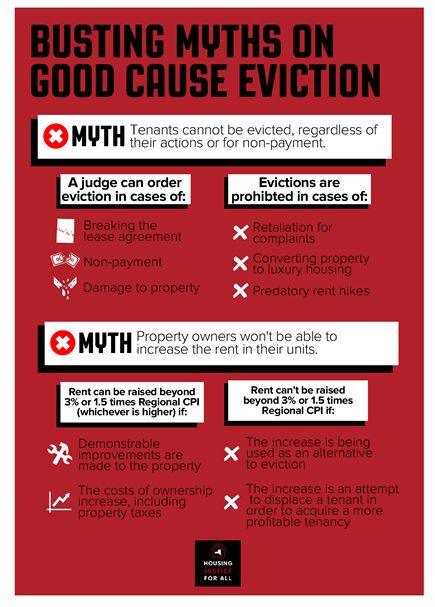