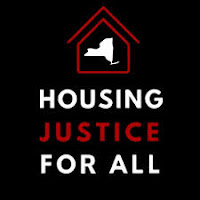 The Upstate-Downstate Housing Alliance
is fighting for greater tenant protections for
all New York residents.  We believe that
housing is a human right; that all people
should live without the fear of eviction;
and that strengthening renters’ rights is
critical to strong neighborhoods, education
and health, and economic stability for all
New Yorkers.

For more than 70 years, New Yorkers
across the state have benefited from
various forms of rent control, which protects
tenants from unjust evictions and arbitrary
rent increases. Now, however, that system
has been eroded so much that it only applies
to tenants in eight counties. It has been
weakened with loopholes that encourage
tenant harassment and allow sudden and
permanent rent hikes. Since 1994, we
have lost nearly 300,000 units of affordable,
rent-stabilized housing. Five million renters in
New York State have no protections whatsoever.

Every tenant in New York, no matter
where they live, deserves the same basic
protections.
In 2019, New York State’s renter protection
framework — commonly known as rent
stabilization — will expire. Our Housing Justice
for All campaign is fighting for a legislative
agenda that would stabilize neighborhoods
and eliminate the control that corporate
landlords have over housing in New York
State.

Remove geographic restrictions in the Emergency
Tenant Protection Act (ETPA): Under the ETPA, commonly known
as rent stabilization, tenants have the right to renew their lease and
landlords are limited in how much they can raise rents. Local elected
officials have the right to “opt in” to the ETPA and enact basic renter
protections to control rising housing costs and displacement. However,
that ETPA only applies to eight downstate counties. This arbitrary
restriction prevents tenants in Kingston or Rochester from having
the basic protections that many tenants in New York City have.

Pass “good cause” eviction protections:
Good-cause eviction legislation, a common-sense renter
protection that exists in New Jersey, would give every
tenant the right to a renewal lease, with a minimal
rent increase based on local market conditions.
Unlike rent stabilization, which only applies to
buildings with six or more units in New York City and
the surrounding counties, good-cause eviction
protection would apply to all renters, regardless
of where they live.
Good-cause eviction protections should also
be extended to cover lot rents in  manufactured-home
communities, which are increasingly owned by corporate
real-estate players.

End vacancy decontrol: Vacancy decontrol lets
landlords permanently deregulate apartments once
the rent reaches $2,733 a month and the current
occupant moves out. This has led to the loss of
hundreds of thousands of stable homes, and will
lead to the eventual phasing out of all renter
protections — a windfall for landlords and a
catastrophic loss for tenants. Our plan calls for
repealing vacancy decontrol and re-regulating
units that have been lost to this egregious loophole.

Stop sudden and permanent rent
hikes that displace tenants from
their homes:

Protect preferential-rent tenants: A preferential rent is
a discounted rent that tenants pay when the legally registered
rent exceeds what a landlord can charge in the market. But
this discounted rent can be quickly snatched away when
their lease expires, leading to sudden and permanent rent
hikes. These rent hikes, often hundreds of dollars,
accelerate gentrification by forcing tenants to give up their
homes and move. Preferential rents should last for the
duration of the tenancy. This also means that all rent
increases would be based on the amount that a tenant
pays when they move into their apartment.

Eliminate major capital improvements:
Under our current system, landlords that upgrade
building systems are able to pass the cost of those
repairs onto tenants forever. However, many of these
building systems repairs are necessary after years of
neglect, and landlords often overstate the cost and extent
of renovations. We would ban landlords from passing
the costs of maintaining and upgrading their investments
onto tenants.

Eliminate the corporate takeover
of housing, and give tenants’
power over where they live:

Stop rewarding tenant harassment: Under rent
stabilization, landlords receive a 20 percent “vacancy bonus”
rent increase every time an apartment becomes
vacant. This gives landlords a big incentive to harass
and evict people from the place they’ve called home
for years. When an apartment becomes vacant,
landlords can increase rent even more through
unnecessary and often fraudulent “individual
apartment improvements.” These cause rents to
skyrocket, and eventually take apartments out of
regulation altogether. We would end the vacancy
bonus and permanent rent hikes for individual
apartment improvements.

Right of first refusal: As predatory-equity
companies buy up manufactured-housing
communities, state law should give residents
the right to purchase them as they go on the market.

Tenants’ right to take legal action: When tenants
don’t pay their rent, landlords are quick to take them
to court for eviction proceedings. But tenants don’t
have the same options when landlords aren’t making
repairs. They should have the ability to take landlords
to court for bad conditions and neglect.